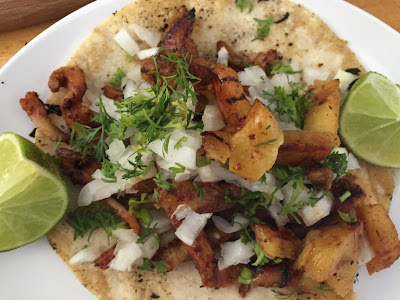 Chef Andrew took out all the remaining bones and trimmed off the rind - reserving both for other uses.  It's such a treat to be able to find authentic ingredients and fresh ethnic produce right in our own backyard in Queens, NYC at stores like Mi Tierra.  Check out these fresh nopale catcus leaves they had on offer this week. 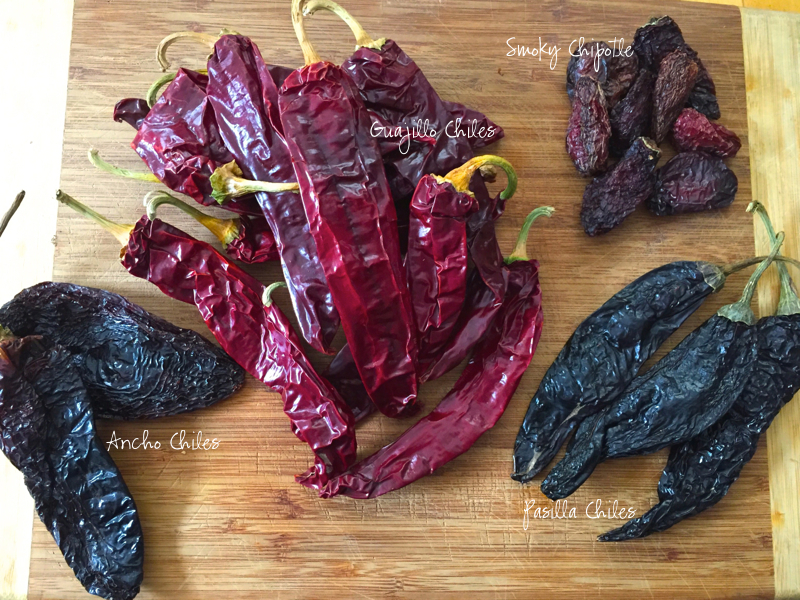 Fun fact about Al Pastor Tacos - usually they are finished on the Rotisserie Spit which is similar to how gyros are made.

Not surprising since El Pastor tacos (Spanish for shepherd's style ) are a culinary cultural adaptation that the Christian Lebanese immigrants brought with them to Mexican during their immigration from Lebanon to central Mexico during the late 19th and early 20th century. Lebanon at that time was part of the Ottoman Empire and was heavily influenced by the Turks, who developed the donor kebab.
Grilling and charring a rotating vertical spit of stacked meat slices and cutting it off as it cooks was developed in the 19th century in Ottoman Turkey.  This is what is called doner kebab, and it was the origins of not only al pastor, but also middle Eastern shawarma and Greek Gyros.
(BTW, don't tell any of them that - they might dispute you or worse yet, do bodily harm.)


Let's get to how to make Al Pastor Pork for Tacos
...even if you don't have a vertical rotisserie spit!

First step is to make achiote paste
from scratch for the marinade.
...Such wonderful aromatics!

Achiote Paste
(for up to 16-18 pounds of al pastor pork)
Note: don't mix up cloves with garlic cloves
like we almost did LOL !!

whiz it all up in a bullet and set aside

use fresh dried whole chiles and
adjust to the spice level you are
comfortable with.  The amount of chiles
in this recipe do not make the meat
especially spicy - it is however,
very flavorful and
makes a wonderful al pastor marinade.


toast chiles in a hot dry pan until just blistered,
a bit puffed and you can smell them,
about 3-5 minutes on high heat

Pour everything into an bowl and cover.
Let the chiles cool and soften while you
prepare the rest of the Al Pastor pork marinade.

Wipe down the saute pan and add the following:
toast first with other spices below
Combine the following in the bullet or blender
then  add chiles that you set aside earlier
and the toasted spices and such
puree marinade in bullet mixer until smooth
to finish marinade mixture.

Steps to prepare and marinate the Al Pastor Pork
cut off rind/skin and cut out any bones – easy to do both.
Set those aside for another use.

If you don't have a vertical rotisserie
options we suggest are either bake/roast
the al pastor pork in oven,
or sous vide the marinated layered al pastor meat
for the first part of the cooking procedure.


Layer the Al Pastor Meat.
Start with some thin slices of pineapple
stack slices of meat neatly in a pile with some
bacon on the bottom and a scatter of raw bacon
in between some of the layers of meat.
Cover the top with a layer of raw bacon.
and another layer of thinly sliced raw pineapple 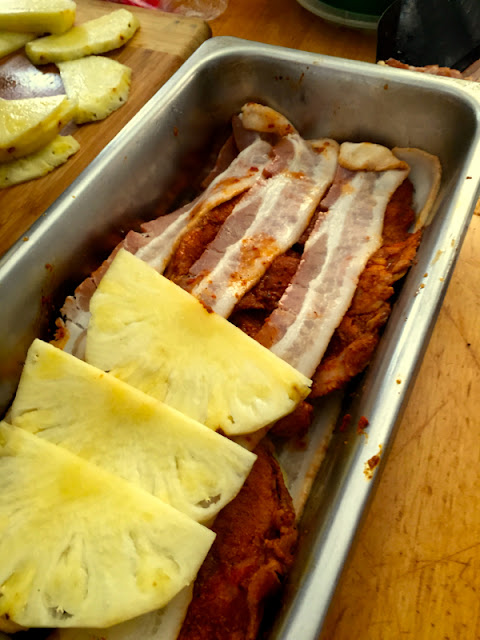 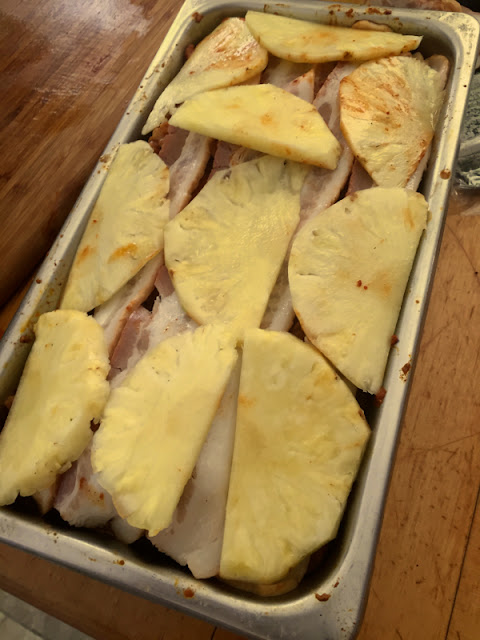 Note: We cooked half the meat in the oven and the other half was cooked sous vide in a water bath for 18 hours at 60 Celsius/140 Fahrenheit.  This was an experiment in which method produced more tender and flavorful results. The winner seemed to be the sous vide which retained more moisture during the cooking process. But both tasted amazing!

As you layer, lightly salt each layer of meat
with kosher salt before placing any bacon.
The bacon helps give the meat more fat,
as well as adding salt which helps the
final product stick/meld together especially
if using the rotisserie.  If oven cooking in pan,
be sure to drain the liquid that accumulates in
the pan and reserve for another use,
before refrigerating the baked meat overnight
to firm up before slicing.

Let the Al Pastor meat marinate 4-6 hours
and up to 24 hours in the refrigerator. 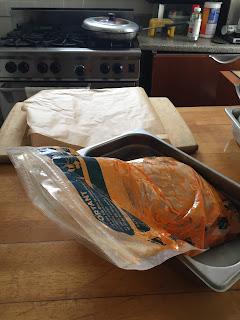 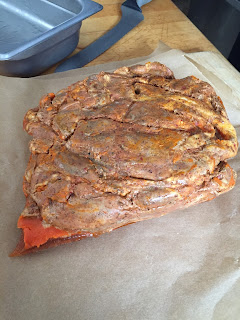 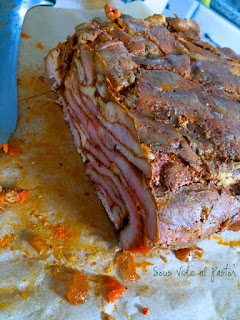 Package and cryovac half the meat (about 4-5 #)
in a airtight sealed bag and
after marinating in refrigerator overnight, sous vide
cook it for 18 hours @ 60 Celsius/140 Fahrenheit
in a large pot of water.  Cover the pot
to stop too much water from evaporating.

This version was cooked in the oven at 275 F convection for 4 hours. When it is done, drained off the liquid – setting it aside for another purpose, and weigh the top with filled water bottles in another quarter pan and refrigerated overnight. 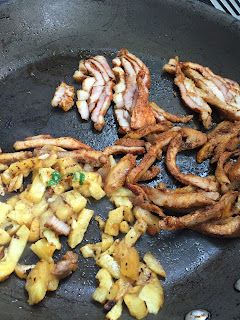 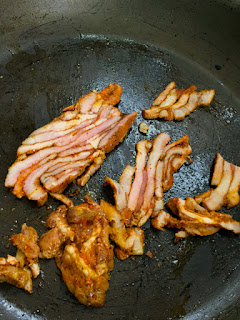 The best results were cutting al Pastor slices about ¼ inch thick from the cooked stack. Using a dry sauté pan heat up slices of the al pastor – it worked best and tasted better when the slices were at least ¼ inch thick.

Mix up some of the heated grilled chopped fresh pineapple with the sautéed! and slightly blackened al pastor heat up some fresh corn tortillas from Tortilleria Nixtamal  and top with chopped raw onion and raw cilantro with a generous squeeze of fresh lime. DELICIOUS and gluten free!

BTW, as far as I know, this is the only Tortilleria in NYC that makes their own masa from scratch.  We are lucky that they are literally in our backyard, less than a 10 minute drive!

It's fun to go watch the tortillas coming off the conveyor that they imported from Mexico.   Their website indicates that they are used by some of the finest caterers and restaurants in NYC. 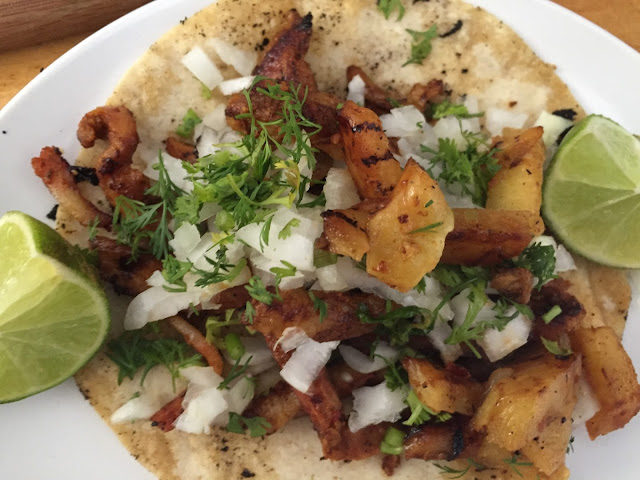 Posted by Unknown at 6:31 PM No comments:

Garden of Eating - A springtime surprise birthday celebration in Larchmont

Imagine a lovely evening with warm breezes .... as the guests enter your charming home in the air wafts the aroma of delicious food and celebration to come in honor of your wife's special birthday.

Our professional wait staff then begin circulating with whimsically presented array of tapas and hors d’oeuvres along with savory dinner food and grazing stations and with the option to conclude with sweet treats.

The following menu that our client hosted is one example that provides a composite of multi-ethnic nibbles, offering a diversity of exciting yet recognizable choices for you and your guests to enjoy in honor of your wife’s surprise birthday celebration.

This is just one example, so bear in mind we work with you to discover what your needs and tastes are and that helps us create YOUR menu !!Our menus are custom designed to what is suitable for your taste and style.  Call Lisa during normal business hours at 646-932-3496 to discuss your event or send an email 24/7.